Parabola has conducted an investigation into SharePoint adoption in the Housing Association sector and this report concludes the results.  “What are others doing” is a question often asked when decisions are being made regarding systems and this research aims to answer that questions with especial regard to SharePoint. This research was conducted after Parabola searched for an existing information source and found none were detailed enough to be useful.

Of the 60% of Housing Associations (HAs) who were using SharePoint there was a wide selection of versions but unsurprisingly SharePoint 2010 was the front runner (see pie chart). All of them were using Standard (42%) or Enterprise editions (58%).

The software is fairly new to Housing Associations.50% of respondents had been using SharePoint for 5 years or less. A further 25% for less than 2 years. This is in contrast to the wider business market, where 78% of the fortune 500 use SharePoint . In software terms, it’s well established: SharePoint was first launched in 2001 and was Microsoft fastest growing business product .

Most of the Housing Associations using SharePoint had usage rates of 90% or more. Just 2 HA’s had partial implementations where only a small team were using the software. One of these explained that they are test-bedding SharePoint in the IT team before roll out.

70% had a high proportion of active users (where 80%+ of staff were using SharePoint on a semi daily basis) with the remainder reporting low activity.

In terms of implementation 33% had used internal resources, suggesting that there are SharePoint experts already working in the social housing sector despite it being relatively new. The other 67% used IT services companies/consultancies.

58% of the associations surveyed were hosting on virtual SharePoint servers and a surprisingly small 17% on physical servers, perhaps showing impact of the costs of physical servers. There were also some early adopters of SharePoint Online with 17% using Cloud hosting.

The survey asked if there was anything holding the associations backin their use of SharePoint. The most common replies were ‘lack of in house skills’ and ‘poor user adoption’. This suggests that a few associations have fallen foul to bad implementations by third parties, who have not ensured a ‘train the trainer’ program or Poor senior management buy-in which results in no top-down effect for adoption. SharePoint can be a big habit shift for employees so it is vital to manage the change effectively.

There were a wide variety of responses when the Housing Associations described what benefits they garnered from SharePoint and you can see the full results below. The most popular include access to and finding of information. This is a common challenge in business, because using file servers or personal drives leads to information silos. Document management and powerful search capability are expected responses as they are two of SharePoint’s quick wins.

There have been only a few examples of integration of SharePoint and housing management systems (HMS). This could be due to the assumption there is no capability in SharePoint or because Housing Management System providers are not interested in allowing integration.

When asked their future plans for SharePoint, virtually all the associations had plans, which shows the increasing acceptance of SharePoint. The answers indicate that some Housing Associations may be struggling with user adoption (“improve staff take up – 42%”, “train staff better – 54%”). The other top answer was to make use of SharePoint’s collaborative features, these features have really come to life in SharePoint 2010 and 2013 so it is easy to see why more and more companies want to start using workflows and document revisions to take their document repositories to the next level.

As mentioned in the introduction to this report 40% of respondents came from Housing Associations not using SharePoint. This presents a valuable learning opportunity into alternatives to SharePoint, the future of IT systems in Social Housing and perceptions of SharePoint.

There is no single alternative to SharePoint, so those not using Microsoft’s system have a variety of systems to replace the various capabilities that SharePoint provides. The survey asked them what systems they were using if any, for most of SharePoint’s main functionality.

What systems are used for sharing information with board members and or suppliers? It seems that many Housing Associations are still using email attachments to share information. There are some widely accepted consumer products on the market such as Dropbox which are being used, but the poor security of these systems compared to enterprise software such as SharePoint is likely to be an issue.

There are some companies who specialise in intranets for Housing Associations but the survey results suggest that no single product is gaining traction here. When asked if they had an intranet and what system they used, half of the respondents had no specific intranet system. The rest were split between a custom built intranet and a few third party intranet CMS solutions such as Sorce and VerseOne.

Have you considered implementing SharePoint and if you have, why did you decide not to implement? 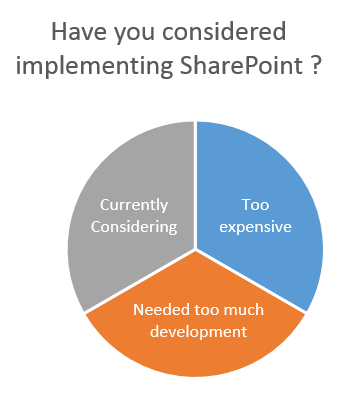 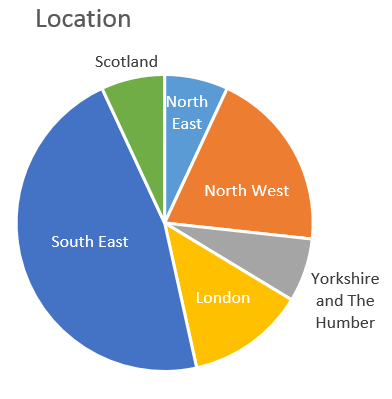 Whether using SharePoint or not, most Housing Associations use a housing management system (HMS). Through previous discussions with HAs these often out of date legacy systems are heavily relied on by management and staff whilst being under supported internally and by the supplier. This reliance is one reason for looking into non housing specific software (such as SharePoint) where the market for support and development is buoyant and competitive.  A variety of HMS were used from Aareon, Capita, Civica and Orchard.

To ensure a varied and representative view of the whole market of Housing Associations a wide variety of sizes, locations and decision makers were studied. However, as you can see, the survey was biased to London and the South East. It is known that there are a concentration of HAs in London and Parabola’s location in this region probably created the skew. The survey was aimed at IT decision makers and senior management who would be knowledgeable about their systems.

It is interesting to note the diversity of those responding to the survey, many of the systems traditionally maintained my IT are now managed by Marketing, Communications or HR e.g. tenant portal and intranet which is presumably why some HR Managers and Heads of Housing completed the research. As expected with this kind of research and as a result of the targeted approach, most of the respondents were from the IT function but ranging in seniority from IT coordinators to IT directors.

Many Housing Associations are already using SharePoint, but not necessarily taking full advantage of its functionality, the document management, collaboration and potential linkages with housing management systems could be better adopted.

Housing Associations using SharePoint have made training and cost savings because there are less systems to maintain, support and purchase.

17% of those Housing Associations using SharePoint were using SharePoint Online, considering it was only launched in October 2012 shows that there are some early adopters in Social Housing and is gaining traction.